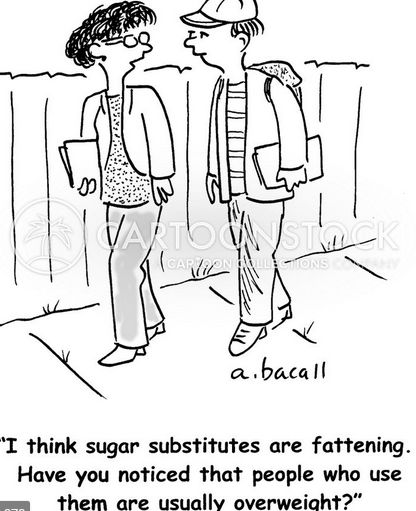 ARE ARTIFICIAL SWEETENERS HEALTHIER THAN SUGAR? HERE’S THE CURRENT THINKING

Saccharin – the first artificial sweetener – was discovered by accident when, in 1879, a researcher from Johns Hopkins University noticed a sweet substance on his hands after experimenting with different chemicals in the laboratory.

Saccharin quickly became extremely popular, mainly due to how cheap it was. It was particularly widespread during World War II, when real sugar was in short supply.

Today, artificial sweeteners are central to the huge market of diet- and sugar-free food and drinks. Their attraction today is not only how cheap they are, but their potential to combat the increasing threat of obesity and its associated health impacts.

Saccharin is over 200 times sweeter than sugar but has zero calories. Does this mean that we should replace all sugar with artificial sweeteners? Or are there more factors to consider?

According to 8 experts who were posed the question, “Are artificial sweeteners better for you than sugar?”. The consensus was 63% ‘likely’. So why was this response not one hundred percent? We explain this result in below more detail:

What are artificial sweeteners and how do they work?

High-intensity sweeteners: Even though these artificial sweeteners provide minimal to no calories that does not mean they are inert. These sweeteners interact with specific sweet-taste receptors in the mouth and gut, which can result in metabolic effects. They may also interact with the bacteria that make up the gut microbiome, resulting in differing, but unknown effects. Sweeteners in this category are the most widely available, and include the following:

Despite their name, sugar alcohols aren’t sugar, and they aren’t alcohol. They are carbohydrates that occur naturally in certain fruits and can also be manufactured. They get their name because they have a chemical structure similar to sugar and to alcohol. Sugar alcohols are also called “polyols.”

Sugar alcohols are found in many processed foods, including hard candies, ice cream, puddings, baked goods, and chocolate. They can also be found in chewing gum, toothpaste, and mouthwash. They may be used in combination with another sugar substitute.

The most common sugar alcohols found in foods include:

How do I find sugar alcohols on a nutrition facts label?

Your body doesn’t completely absorb sugar alcohols, so they don’t affect your blood sugar levels as much as sugar and other carbohydrates do.

According to the FDA, sugar alcohols are “generally recognized as safe” (GRAS). This means that qualified experts agree the available scientific evidence shows they are safe for use in foods and drinks. However, you should consume them in moderation. Because sugar alcohols aren’t completely absorbed by your body, eating large amounts can lead to bloating and diarrhea.

Is there a link between artificial sweeteners and cancer?

Concern that artificial sweeteners could be carcinogenic stems from a 1978 study which disclosed that rats that were fed saccharin in large amounts developed bladder cancer. Since then, it has been shown that this only happens in rats, and saccharin does not cause cancer in humans. Not just saccharin, but all of the FDA and EU approved artificial sweeteners have undergone extensive testing in laboratory animals, which is also consistent from data collected from humans. None of the approved sweeteners have any connection to cancer.

The main attraction of artificial sweeteners is that they can replace sugar. There is a huge amount of evidence to suggest that high sugar consumption is bad for your health. Sugary drinks in particular can lead to weight gain, metabolic diseases, and type 2 diabetes. It follows that swapping sugar for calorie-free sweeteners could lead to weight loss.

1) There are many types of sweeteners, each of which may have different effects on weight loss.

2) Changes in diet other than the switch to sweeteners could have conflicting effects. There is data in humans that the co-consumption of artificial sweeteners with other foods may have interaction effects that might alter the absorption of energy.

3) It is likely that the impact of sweetener on weight loss depends on the original weight and diet of the individual, a result that was found in the 2018 pooled analysis study.

4) It is uncertain why many people fail to lose weight with artificial sweeteners, and in some cases actually gain weight. These products may contribute to increased appetite, fuel food-seeking behavior and encourage sugar cravings. This intriguing hypothesis requires more research before we can draw firm conclusions.

No silver-bullet to obesity crisis

Overall, considering that artificial sweeteners are essentially calorie-free, the data on their positive health impacts is perhaps a bit disappointing, especially since the prevalence of obesity and overweight have tripled in the last 50 years despite the popularity of low-calorie sweeteners and their ubiquity.

On the flip side, there is plenty of evidence that they are safe and not linked to any cancers. Whether they have some other possible effects on our sugar cravings or microbiome, remains to be determined.

Sugar-free alternatives, particularly of drinks, could be beneficial to someone who is trying to lose weight or improve their diet. However, the data suggest that they are not the healthiest option available. Although a diet drink might be better than a sugary one, water might be even better yet, and cheaper to boot!

11 thoughts on “ARE ARTIFICIAL SWEETENERS HEALTHIER THAN SUGAR? HERE’S THE CURRENT THINKING”