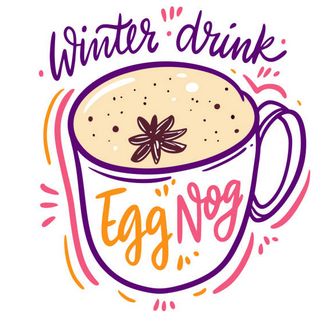 Before You Drink Eggnog, Read This

Holiday celebrations call for a celebratory drink, and nothing fits the bill quite like a cup of rich, creamy eggnog with or without a splash of bourbon, brandy, or rum.

But as with many holiday treats, eggnog—traditionally made with eggs, cream, milk, and sugar—is loaded with calories, fat, and added sugars. And there’s an additional health concern with eggnog: If it’s made with raw eggs, it can be a food-poisoning risk.

Does that mean you should take a pass on this holiday cup of cheer? Not necessarily. You should just remember to indulge in moderation, and check out these nutrition and safety facts before you raise your glass.

A Serving Is Smaller Than You Think

Usually, the serving size for a drink is 1 cup (8 fluid ounces). But for eggnog, the serving size on the nutrition facts panel is for just a half-cup. If you drink more than that, remember to double (or triple) the figures for calories, fat, and added sugars you see on the carton.

The nutritional content of different brands varies, but not by much. In general, the regular dairy versions contain 170 to 190 calories, 9 grams of fat, and 11 to 14 grams of added sugars. Adding an ounce (a little less than a shot glass) of rum, brandy, or other type of spirits tacks on 65 calories.

According to Consumer Reports, when you’re scanning the selections of pre-made eggnog at a store, you’ll see several takes on the traditional recipe. Those labeled “low fat” or “light” typically contain about 140 calories and less than 4 grams of fat per half-cup serving. But the added sugars content is similar to or only slightly lower than regular eggnog. For example, Hood’s Golden Eggnog has 180 calories, 9 grams fat, and 16 grams of added sugars. Its Light Eggnog has 140 calories and 4 grams fat, but the same amount of added sugars. The dairy eggnogs with the least added sugars are regular Organic Valley Eggnog and Trader Joe’s Lite Eggnog, both containing 11 grams per half-cup.

Vegan Eggnogs Can Be Healthier

Holiday eggnog made from nut or soy milk will give you the flavor of the season, and it tends to be lower in calories and saturated fat because it doesn’t contain cream, eggs, or milk. They are usually lower in added sugars than dairy versions. Califia Almond Holiday Nog and Trader Joe’s Almond Nog contain just 50 calories, 1.5 grams of fat, and 8 grams of added sugars.

You Could Consider Making Your Own, But that May not be a Great Idea

Homemade eggnogs can be even higher in calories, fat, and sugars than commercial versions. Using a traditional eggnog recipe spiked with bourbon or rum, a half-cup serving may contain as much as 265 calories, 17 grams of fat, and 18 grams of sugars. But you can lighten up a recipe by substituting half and half for heavy cream and using about half the sugar called for. One advantage of making your own is that you can avoid processed ingredients, such as artificial and natural flavors, artificial colors, and thickeners such as gums or carrageenan. (“Natural flavors” must come from a natural source but can be highly processed with chemicals and include many ingredients that don’t have to be disclosed.) Most eggnogs have at least one of these, but Organic Valley Eggnog is a dairy option that contains only gellan gum but no artificial or natural flavors.

It Doesn’t Take Much to Make Eggnog Safer

Classic eggnog recipes call for raw eggs. Eggnog made with raw, unpasteurized eggs can contain salmonella, a leading cause of food poisoning. The bacteria can make anyone sick, but young children, older adults, pregnant women, and anyone with a weakened immune system are particularly vulnerable.

You can ensure that you and your guests are sipping safely, though, because. almost all of the eggnog sold in stores is pasteurized, which kills bacteria, but be sure to check that the carton or bottle is clearly labeled as such. If you make your own, use pasteurized liquid eggs, which are sold in a carton. Or heat raw eggs (mix them with milk and stir constantly) to 160° F to kill any salmonella bacteria that may be present before adding them to your recipe. Don’t count on alcohol to kill the bacteria because the concentration isn’t high enough to reduce the risk of illness.

PrevPreviousWhat Is the Risk of Catching the Coronavirus on a Plane?
NextFish: Should You Buy Farm Raised Or Wild Caught?Next