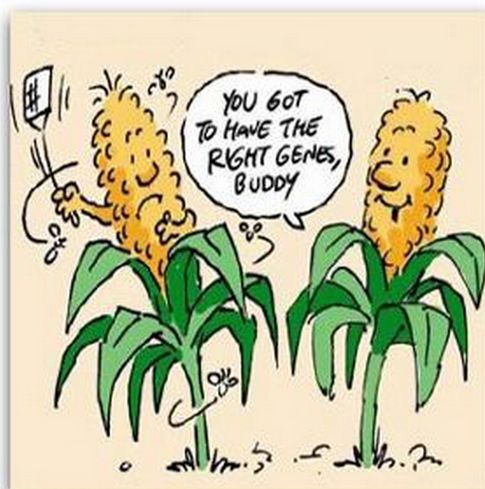 SHOULD WE AVOID ALL GENETICALLY MODIFIED FOODS?

Genetically modified (or GM) plants have attracted a large amount of media attention in recent years and continue to do so. Despite this, the general public remains largely unaware of what a GM plant actually is or what advantages and disadvantages the technology has to offer, particularly with regard to the range of applications for which they can be used. From the first generation of GM crops, two main areas of concern have emerged, namely risk to the environment and risk to human health. As GM plants are gradually being introduced into general use, there is likely to be increasing public concern regarding potential health issues. Although it is now commonplace for the press to adopt “health campaigns”, the information they publish is often unreliable and unrepresentative of the available scientific evidence. I consider it important that we all should be in a position to provide an informed opinion.

Many Americans are suspicious about what they are eating and thus have requested that food from genetically modified (GM) crops be labeled as such, if not eliminated. Variable successes in this endeavor have been achieved at ballot boxes in several states. Going one step beyond mere labeling, Hawaii Island, in response to overwhelming public support, has banned even the cultivation of all genetically engineered crops on the island, with the exceptions of corn and papaya (which had already proved to be highly successful). The Food and Drug Administration is often urged to mandate such labeling for the entire country. Unfortunately, however, the general public is largely unaware of what a GM plant actually is and what advantages the technology has to offer. With regard to such crops, two main areas of concern have emerged:

2. Effects on the environment.

Below I will examine these and other points and detail the considerable advantages possessed by these plants.

WHAT ARE GENETICALLY MODIFIED PLANT FOODS?

Plants with favorable characteristics have been produced for thousands of years by conventional breeding methods. Desirable traits are selected, combined, and propagated by repeated crossings over multiple generations. This is a long process, taking up to 15 years to produce new varieties. Genetic engineering allows this process to be dramatically accelerated in a highly targeted manner.

Transgenic plants are those that have been genetically modified using DNA technology. This may involve including a gene that is not native to the plant or to modify existing genes capable of conferring a particular trait to that plant. The technology can be used in a number of ways, for example to create resistance to various stresses such as drought, extreme temperature or salinity, and resistance to harmful insects. It can also improve the nutritional content of the plant, an application that could be of particular use in the developing world. New-generation GM crops are now even being developed for the production of medicines and industrial products, such as antibodies, vaccines, plastics, and bio-fuels.

Food derived from GM plants is ubiquitous in the USA, and is also included in many animal feeds. Similarly, GM cotton is widely used in clothing and other products.

THE NEED FOR MORE CROPS

In the developing world, 840 million people are chronically undernourished and do not have secure access to food. Many of them are also rural farmers in developing countries, depending entirely on small-scale agriculture for their own subsistence and for a livelihood. They generally cannot afford to irrigate their crops or purchase herbicides or pesticides, leading to poor crop growth, falling yields, and pest susceptibility. To meet the increased demands in a growing world, food production in the next few decades must increase substantially in the face of decreasing fertile lands and water resources. GM plant technologies are one of a number of different approaches that are being developed to combat these problems. Specifically, studies are under way to genetically modify plants both to increase crop yields and to improve nutritional content.

Commercial GM crops can be made to be insect resistant, a worldwide advantage. This has been particularly successful in the USA: For example, insect resistant GM corn is grown over millions of acres and comprises 35% of all corn grown in this country.

Insect-resistant GM cotton requires far less pesticide application and produces higher crop yields than the non-GM counterpart, generating savings of up to $200 per acre for farmers.

In the developed world the nutritional content of food items is not of major concern, as individuals have access to a wide variety of foods that will meet all of their nutritional needs. In the developing world, however, people often rely on a single staple food crop. GM technology offers a way to alleviate some of these problems by creating plants that can combat malnutrition.

An important example of the potential of this technology is the ‘Golden Rice Project.’ Vitamin A deficiency is widespread in the developing world and is estimated to account for the deaths of approximately 2 million children per year. In surviving children it has been identified as the leading cause of blindness. Humans can synthesize vitamin A from its precursor β-carotene, which is commonly found in many plants but not in cereal grains. The strategy of the Golden Rice Project was to introduce the correct metabolic steps into rice endosperm to allow β-carotene synthesis. In 2000, one group of scientists engineered rice that contained moderate levels of β-carotene, and since then other researchers have produced the much higher yielding ‘Golden Rice 2.’ It is estimated that about two ounces of dry Golden Rice 2 will provide 50% of the requirement of vitamin A for a one to three year-old child. This is an impressive example of a health solution that can be offered by plant biotechnology.

ARE GM FOODS SAFE TO EAT?

For more than a decade, almost all processed foods in the United States—cereals, snack foods, salad dressings—have contained ingredients from plants whose DNA was manipulated in a laboratory. Regulators and scientists say these pose no danger.

In the USA, the Food and Drug Agency, the Environmental Protection Agency and the US Department of Agriculture, Animal and Plant Health Inspection Service are all involved in the regulatory process for GM crop approval. Consequently, GM plants undergo extensive and rigorous safety testing prior to commercialization.

Foods derived from GM crops have been consumed by hundreds of millions of people across the world for more than 15 years, with no reported ill effects (or legal cases related to human health), despite many of the consumers coming from that most litigious of countries, the USA.

Is there any reason that GM crops might be harmful when consumed? The presence of foreign DNA sequences in food poses no intrinsic risk to human health. All foods contain significant amounts of DNA. Of potential concern is the possibility that the protein produced by the modified gene may be toxic, but such a negative effect has not been found after careful safety assessment of these products.

A potential allergic response to the novel gene product is another commonly expressed concern. New varieties of crops produced by either GM techniques or conventional breeding both have the potential to cause allergies. Concern surrounding this topic relates to two factors; the possibility that genes from known allergens may be inserted into crops not typically associated with such problems and the possibility of creating new, unknown allergens by either inserting novel genes into crops or changing the expression of endogenous proteins. In response to this issue, scientists have devoted much effort in studying both humans and animals. Thus far, the allergic potential for such products appears to be less than—or equal to—their “naturally” grown counterparts. In some instances, safety testing of GM plants has been effective in identifying allergenic potential in animals before some products have been released to market. By contrast, if conventional plant breeding techniques had been used to achieve the same aims, there would have been no legal requirement for the assessment of allergenicity, and the plant varieties could have been commercialized without any such testing. Moreover, GM technology might also be used to decrease the levels of allergens present in plants by reducing expression levels of the relevant genes. For example, research was recently undertaken to identify an allergen in soybeans and remove it using GM technology.

GM PLANTS AND THE ENVIRONMENT

To date, none of these fears has materialized. By contrast, GM plants may have a positive role to play in the environment by selective removal of pollutants. For example, plants have already been genetically engineered to accumulate heavy metal soil contaminants such as mercury and selenium to higher levels than would be possible for non-GM plants, so not only can they grow on contaminated sites but they can also reduce contamination. These plants can be harvested and destroyed, the heavy metals disposed of or recycled, and the decontaminated field re-used.

According to a survey taken by the Pew Research Center, the differences in beliefs about this issue between the public and scientists are wide; 88% of scientists think GMO foods are safe, whereas only 37% of the American public think they are safe.

Several organizations are implacably opposed to GM plants. Crops that have been designed to help relieve malnutrition in the developing world, such as Golden Rice, are attacked on the basis that it “tastes awful” and that “to be of any benefit a child would have to eat approximately 3 lbs of cooked Golden Rice,” an over-estimation by more than 15 times according to best estimates.

Others have irrationally claimed GM food is “unnatural,” despite the fact that all our food has been produced over millennia by artificial breeding. When considering “natural” food production, one should recognize that technology has always played an important role in this enterprise and will continue to do so.

Opposition to GM crops is fairly widespread, possibly attributable to the public’s current infatuation with “unadulterated” or “organic” products, despite the fact that food from GM crops already comprises a large portion of the normal diet in this country.

Nevertheless, since much opposition to GM crops does exist, scientists must work to combat the misinformation and biases that exist. Persistent opposition is having many serious effects, especially because many developing countries that could benefit from the technology will not take it up as long as they believe that there remain significant areas of concern and that their potential for exports will be seriously impaired. This then reduces opportunities for improving GM crops to provide a solution that will be crucial in helping to alleviate current and future challenges in food and medicine supply.

None of the fears about these modified foods has ever been substantiated. Nevertheless, there is a political movement to force the industry to label or eliminate GM foods entirely. This is unfortunate, for it not only sends the wrong message, suggesting that these foods somehow are “impure.” This makes about as much sense as forcing them to state that oatmeal contains “oats” or that popcorn contains “corn.” Irrational opposition to these products is likely being propagated by the same individuals who deny, among others, global warming and evolution.

PrevPreviousHERBAL AND DIETARY WEIGHT-LOSS SUPPLEMENTS: NO EVIDENCE THAT THEY WORK
NextBefore You Drink Eggnog, Read This!Next