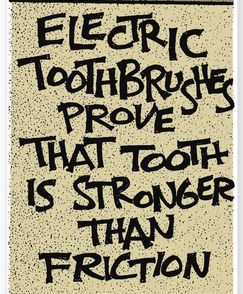 SHOULD YOU USE AN ELECTRIC TOOTHBRUSH OR A MANUAL TOOTHBRUSH?

Modern toothbrushes can do far more than just clean your teeth and freshen your breath. Some premium electric toothbrushes not only time your brushing to ensure that you keep cleaning for the full 2 minutes but also warn you if you are pressing the brush against your teeth too hard, potentially damaging teeth or gums.

But most people still use a traditional manual toothbrush instead of a powered device. According to a recent report, only 36 percent of adults say they use an electric toothbrush. These devices are more popular among older age groups and people with higher incomes, however: about half of people 55 and older with annual incomes of $75,000 or more prefer using an electric toothbrush over a manual one.

Ever since the advent of the electric toothbrush—battery-operated devices whose bristles vibrate or rotate rapidly—in the 1960s, debate has raged over whether powered or manual toothbrushes do a better job at cleaning teeth, and whether one type is safer than another for your teeth and gums.

There are, of course, cost differences between electric and manual toothbrushes. You can buy a manual toothbrush for less than a dollar, and basic powered models—which run on replaceable batteries—can be had for less than $10. Those with rechargeable batteries (for which a single charge lasts anywhere from a few days to several weeks) start as low as $20. But you can spend more than $250 for a high-end “smart” electric toothbrush that syncs with an app on your phone and offers recommendations on improving your brushing technique.

Which should you choose? Dental experts point out that each has its pros and cons, and that personal preferences and factors such as your age and general health might play a role in which kind of toothbrush is best for you. Whichever you use, dentists agree that brushing your teeth for 2 minutes, twice a day, is the most effective step you can take for oral health. This helps get rid of bacteria that causes plaque, a sticky, germy film that adheres to teeth. When plaque builds up, it can cause tooth decay as well as gum disease.

Here’s what to know and how to decide what’s right for keeping your pearly whites strong, clean, and cavity-free.

A German study published in 2019 in the journal Clinical Periodontology also found that electric toothbrushes were more effective for gum health. Here, researchers followed 2,819 adults over 11 years, determined that using a powered toothbrush reduced the progression of periodontal disease. Plus, electric toothbrush users had healthier gums overall and retained 19 percent more teeth over the study period than those using a manual toothbrush.

That said, “You can brush very effectively with a manual toothbrush,” says Matt Messina, DDS, a consumer adviser with the American Dental Association (ADA). “If you get good checkups and your dentist is confident you’re doing a thorough job, you don’t need to change from a manual brush.”

There are a lot of studies in favor of both sonic pulse technology and rotating-oscillating. But as it turns out, there’s very little scientific evidence which technology is in fact more effective. Opinions are divided, and experts can’t seem to reach an agreement. One thing professionals agree on, however, is that an electric toothbrush is more beneficial than a manual toothbrush.

Can an Electric Toothbrush Hurt Your Teeth?

Electric toothbrushes can be very, well, powerful, which explains why they can do such a thorough job on plaque. But too much power may also be potentially problematic. A 2017 study published in a major journal found that electric toothbrushes were more likely than manual to abrade dentin—the tissue directly below the tooth’s enamel, which can become exposed when enamel wears away or gums recede. Abrasions to the dentin increase tooth sensitivity and can hike cavity risks. For the study, researchers took dentin samples from teeth and then used a machine that simulated the effects of eight-and-a-half years of brushing. They found that sonic toothbrushes caused the most abrasion to the dentin, followed by oscillating, and that manual toothbrushes—especially those with rippled bristles—created the least. Another simulated brushing study, this one published in 2013 in the journal Clinical Oral Investigations, had somewhat different results. It found that manual and electric toothbrushes had similar effects on intact enamel, but that on worn enamel, manual toothbrushing abraded dentin more.

But there’s an important caveat: In this study, the manual brushing simulation used a lot more force than the powered brush simulation. And experts say that brushing too forcefully with any kind of toothbrush may increase the likelihood of gum recession and damaged tooth enamel. In fact, a gentle touch with a soft-bristled toothbrush—whether manual or electric—is the safest bet. According to one expert, “It doesn’t take much force to brush away bacteria and food particles”. And that may be especially important to keep in mind with electric toothbrushes. “When you brush with a powered toothbrush, you don’t really have to do anything because the rotating or vibrating head does the work for you.”

What’s in a Toothbrush?

When you’re deciding on a toothbrush, consider the basics first. Both electric and manual toothbrushes come in a variety of head sizes and bristle configurations, including bristles that are clustered, angled, or rippled in various ways. Some studies have shown that tapered or angled bristles are slightly more effective at reducing plaque than flat brushes..

Whether you opt for a manual or an electric toothbrush, choose one with soft bristles. Bristles that are too hard are more likely to cause damage to gums and enamel.

When in doubt, it’s wise to check to see whether a toothbrush has earned the ADA Seal of Acceptance. That indicates that it’s been independently tested, and that it safely and effectively removes plaque and reduces gingivitis.”

If you’re thinking about an electric toothbrush, one feature to consider is a 2-minute timer. According to the ADA, most people brush for an average of only about 45 seconds, so a timer may encourage you to brush longer. (Certain manual toothbrushes also have this feature or light up after 2 minutes of use.) Some electric models have a quadrant timer that buzzes every 30 seconds to remind you to move on to another area of your mouth.

An electric toothbrush with a pressure sensor may be beneficial for people who tend to brush too aggressively. Some models sense if you’re pushing too hard and respond by stopping the bristles from moving until you lighten your touch.

Electric toothbrushes may also yield better results for certain groups, experts say. For instance, older adults, especially those with arthritis, might not have the dexterity to maneuver a manual toothbrush effectively. Powered brushes not only do much of the work for you, but the larger handles are easier to hold.

Youngsters may benefit from them for the same reasons. Plus, some electric toothbrushes made specifically for kids play music or connect to timer apps to encourage longer brushing sessions—although whether or not that actually inspires children to brush for the recommended 2 minutes hasn’t been studied. (The ADA and the American Academy of Pediatric Dentistry recommend that parents supervise kids’ brushing until they’re about 7 or 8 and say that kids who can routinely tie their own shoes can also brush their own teeth, with a manual or an electric toothbrush.)

An electric toothbrush can also be a boon for anyone with braces. It’s much easier to get around all the brackets and wires than with a manual brush. Some powered products even have heads specifically designed to clean thoroughly around and between braces.

Use the Best Toothbrushing Technique

Whether you choose a basic toothbrush or one with all the bells and whistles, the way you brush is key. The correct technique can be used with a powered or manual toothbrush. People who do a good job can do a good job with either.”

To get the most out of every toothbrushing session:

Hold the toothbrush at the proper angle. The biggest mistake most people make is holding their toothbrush at 90 degrees, which cleans the teeth but not the gums. Bacteria grow in the space between the teeth and gums, and in order to disrupt it, you need to use the bristles at a 45-degree angle and get them below the gum line.

Be thorough. Regardless of what type of brush you use, you still have to make sure the bristles touch every surface of every tooth. Clean the front and back sides of all your teeth, top and bottom, including the sharp edges. You also need to get the toothbrush behind your back teeth. For good measure, use your toothbrush to go over the surface of your tongue, to reduce bacteria and prevent bad breath.

Use the right touch. There’s a fine line between doing a good job and overdoing it. If you’re concerned that you’re brushing too hard, try this trick: Instead of grasping the toothbrush in your fist, hold it with just your fingertips. It doesn’t allow you to put as much pressure on your gums. And know the signs of overly aggressive brushing: tooth sensitivity, bleeding or irritated gums, receding gums, and splayed toothbrush bristles.

Replace your toothbrush regularly. You’ll need to break out a new toothbrush—or a new brush head for an electric toothbrush—every three to four months. If you notice the bristles are frayed or splaying open, it’s definitely time for a new one. Splayed bristles can no longer effectively get under the gum line.

7 thoughts on “SHOULD YOU USE AN ELECTRIC TOOTHBRUSH OR A MANUAL TOOTHBRUSH?”