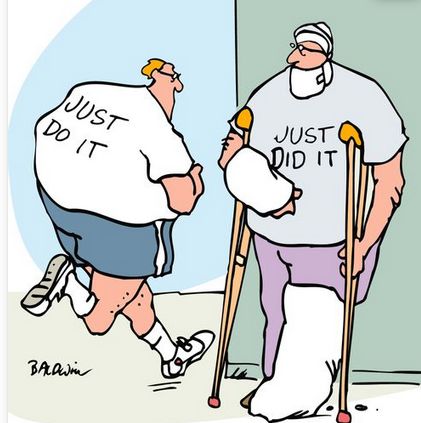 Sadly, the annals of history are littered with failed “treatments” of all sorts that, at the time, seemed logical, but when subjected to the crucible of scientific confirmation, proved to be not only ineffective, but often downright dangerous! Examples of such foolishness, although too numerous to list, extend from such procedures as blood-letting for many maladies, to prolonged bed-rest for heart attacks and many other common illnesses. Later scientific reevaluation proved most of these “remedies” to be either ineffective or counterproductive. So now comes another example:

Whenever we encounter acute muscular and skeletal injuries, whether fractures, sprains, or others, we automatically and slavishly apply the time-honored immediate ritual of RICE (Rest, Ice, Compression, and Elevation). This approach seems intuitively logical, but has it ever been subjected to experimental confirmation?

New Study: The practice of icing injured muscles. If you’re injured playing sports, we usually apply ice on the affected muscle to reduce inflammation, pain, and swelling. Sounds logical? A new study has thrown “ice” on this practice. By using a mouse model of eccentric contraction, researchers showed that icing injured muscles actually delays the process of muscle regeneration, prolonging the time they will take to heal.

The study, published in the Journal of Applied Physiology, focused on the commonly used RICE (Rest, Ice, Compression, and Elevation) treatment for skeletal muscle injuries. Researchers hypothesized that because the ice suppresses inflammation, the body’s ability to heal itself is likely inhibited. Using a mouse model of eccentric contraction, a common form of sports injury in which the muscles lengthen as they contract, researchers compared the healing time of two groups of mice, one of which had their injuries iced for three 30-minutes sessions per day for two days. They observed inflammatory cells traveling to the site of the injury, removing debris and beginning to build new muscle. After two weeks, researchers found that the mice who weren’t subject to icing were healing at a faster rate, because it’s harder for the inflammatory cells to enter the muscle when ice is applied. The findings indicate that icing injuries may not be such a good idea after all.

HOW SHOULD WE RESPOND TO SUCH INFORMATION?

Science generally requires additional studies to confirm or refute the observations noted above. In general, after initial animal studies show an encouraging effect, human confirmation would be the next step. However, an acceptable experimental design in humans, which would require numerous subjects split into treatment and “control” (untreated) groups would be impractical, means that reliance be placed on animal studies alone. Therefore, lacking objective studies in humans to support icing, our best course presently would be to subtract the “I” (icing) from RICE and treat early muscular trauma with “RCE” only, i.e. rest, compression, and elevation. This altered approach would, at best, be unlikely to be harmful! Further experimental studies would be helpful.

PrevPreviousANOTHER EXAMPLE OF POLITICS VERSUS SCIENCE: USE OF MEDICATIONS TO TERMINATE PREGNANCIES
NextTHE REMARKABLE ADAPTABILITY OF SCIENCENext

3 thoughts on “TREATMENT STRATEGIES: LONG-STANDING PROCEDURES MUST OFTEN BE CHALLENGED.”