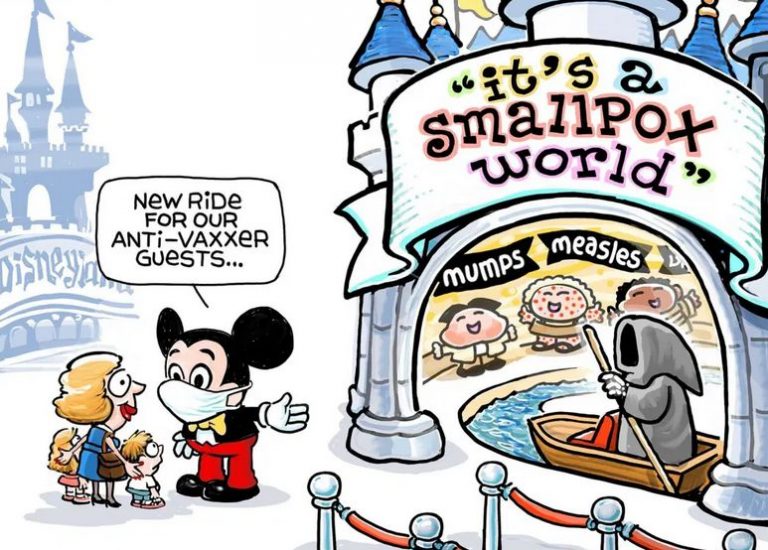 Throughout the ages, smallpox, now known to be caused by a virus, was a serious, and often deadly, disease that had spread worldwide. It appeared in Europe sometime between the 5th and 7th centuries AD, and was frequently epidemic during the Middle Ages. The fatality rate varied from 20% to 60%, and left most survivors with disfiguring scars, often causing blindness. The medical term for smallpox was variola.

No story better exemplifies the elegance and simplicity of the scientific approach better than that of Edward Jenner (1749–1823) and his conquest of smallpox. Jenner was born in rural England in 1749. When he was 13, he was apprenticed to a country surgeon where he heard a dairymaid say, “I shall never have smallpox for I have had cowpox.” At that time it was a common belief that dairymaids were protected from smallpox.

Having completed a surgical apprenticeship, Jenner turned his attention to smallpox in 1796 and began the process that culminated in the worldwide eradication of this disease. Remembering the dairymaid’s statement, he hypothesized that immunity to cowpox (a very mild condition) might confer immunity to smallpox, and then postulated that transmitting cowpox from one person to another might confer immunity against smallpox. In May 1796, Jenner inoculated an 8-year-old boy with matter from a dairymaid’s cowpox lesion. The boy developed a mild fever and slight discomfort, but recovered within ten days after the procedure. In July, Jenner inoculated the boy with matter from a fresh smallpox lesion. No disease developed, and Jenner concluded that the boy was immune to smallpox.

Initially this work was met with rejection, but he collected a few similar cases and published the results privately. In it he observed that the Latin word for the disease cowpox is vaccinia, and so named the new procedure vaccination.

Jenner conducted a nationwide survey in search of proof of resistance to smallpox among persons who previously had had cowpox. The results of this survey supported his theory and provided one of the world’s first epidemiological studies.

Henceforth, despite ongoing controversy, vaccination spread rapidly in England, and by 1800 it had reached most European countries and made the jump to North America. Later, pharmaceutical companies found ways to produce the the same virus for large populations.

During the mid twentieth century, the process of worldwide eradication was set in motion, culminating when the World Health Organization finally declared in in 1977 that smallpox was totally eradicated.

Similar astounding results have been achieved in other serious diseases, most notably polio, and, since 1979, no cases have been encountered in the U.S., with only a few hundred reported world-wide.

Almost from the time of Jenner, however, a movement was born to deny the efficacy of immunization, now labeled the “anti-vaccination” movement, and it has persisted to this day. Throughout the ages, advocates have used many false techniques in the effort to debunk vaccination, including various scare messages, often anecdotally alleging bad side effects, and many others. They sometimes gain attention by using public figures functioning as shills. More recently, the anti-vaccination movement gained steam, resulting from a study published in 1999, describing a small group of 12 children who were supposedly normal until after they received a standard immunization to prevent measles, mumps and rubella (MMR), they presumably developed autism in the aftermath. Even if accepted as a valid observation, the numbers in this study were very small, and careful controlled studies would have been necessary to establish a causative role for the immunizations. Moreover, the author of this “study” was found to have falsified information, which resulted in retraction of the original paper and the revocation of his medical license. Nevertheless, this report ignited a worldwide scare over vaccines and autism—and caused millions of parents to delay or decline potentially lifesaving immunizations for their children. Subsequently numerous independent studies were performed that failed to find any link between vaccines and autism. Unfortunately, vaccination rates in England and worldwide plummeted after the study was publicized. To this date, nearly 40% of American parents also have declined or delayed a vaccine, according to the Center for Disease Control. Many parents now have a vague distrust of vaccines—with little to no memory of diseases that terrified their grandparents. Sadly, in recent years, the herd immunity to measles that had reached 90% is no longer present in many areas, and this disease has begun to reappear, often in a more serious form (encephalitis, or even deaths).

Some of the arguments against all vaccination include the following:

Vaccines contain “dangerous” chemicals like MSG, antifreeze, phenol, formaldehyde, aluminum and lead. While it’s true that many vaccines contain chemicals like mercury aluminum and formaldehyde, the doses are so small that the substances are not considered toxic. For example, vaccines contain tiny amounts of aluminum to help make the shots more effective. In total, the aluminum present amounts to about 0.125 mg per dose, which is way less than the average 30 to 50 mg the average human consumes every day. And even though the mercury used in vaccines is also negligible, it was removed from almost all childhood vaccines in 2001 after public outrage.

These diseases aren’t even all that dangerous. If you’ve got the measles what’s the worst that can happen? Vaccines have been so effective they have stopped millions of people from dying and prevented millions more from permanent physical disabilities.

Vaccines can give you autism. See above

People should have the choice to vaccinate because the choice only affects themselves. Wrong. Vaccines don’t just protect you, they also help other people stay healthy around you – especially old people, young people and people who can’t get vaccinated themselves, like those undergoing chemotherapy. This is called herd immunity, and it effects the health of everybody – not just you.

It’s all a conspiracy and big pharma is secretly trying to kill us. Wrong, for obvious reasons; these companies want to make money, and dead people are a poor source for that!

Vaccine Injury Is Common because People Are Getting Sicker. This is the most common objection, and being obviously wrong, needs no explanation.

Now we are encountering a similar resistance to vaccination against the COVID virus. Hopefully it will not prevent more needless suffering and deaths, because if we don’t achieve an estimated 70-80% rate of population immunity, a rate needed to reach the required to achieve “herd immunity,” we would be unable to to end this pandemic once and for all.

PrevPreviousWhat You Need To Know About Different Kinds Of Coronavirus Tests
NextOleander extract for covid-19: it could kill viruses, but everything else as well. Maybe even some political figures!!Next